Samples of her work on display…

Last month we covered the fraudulent weirdness from the Cult of Crunchyroll. This month we’re fraught with concern. Designer and Costume Fabricator, Italiano Couture, done goofed. It started before this year but we have, on good authority, the evidence below:

This was from  Model Scarlet who made a public announcement about it on Facebook: 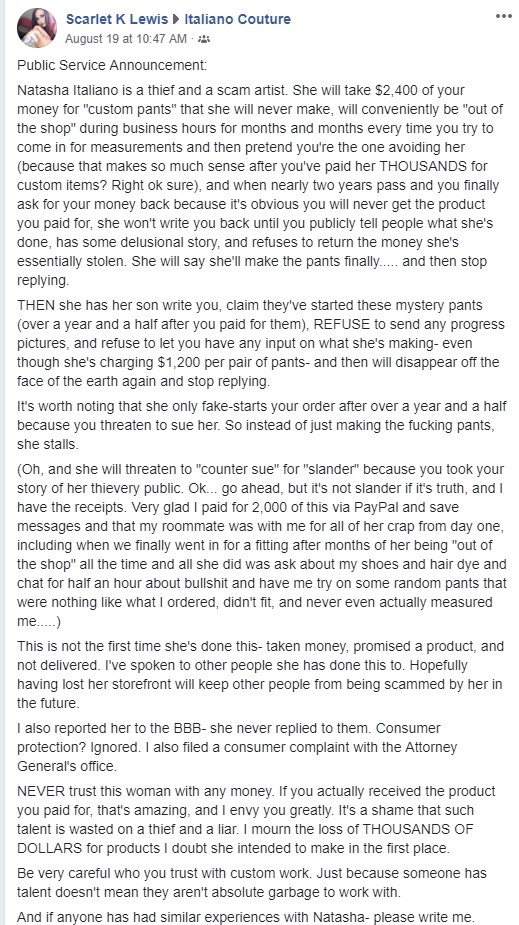 Upon reviewing the data we found that this isn’t the only person she’s snowed. It seems like Italiano Couture has a history of doing shady and shoddy ethical practices. It was happening a year ago and Scarlet spoke up then too.

We sent a message on Facebook through one of our affiliated news pages and received no response. Upon further interview with Scarlet we have a story that goes beyond what we can disclose here. The question now is:

At this point in time we have to reflect. As a professional who has taken money it is your duty to provide a product. Because if you don’t you’ll be a fraud like EA, Crunchyroll, Gearworks or any number of industry giants out there. Just because you have the customer’s money does not give you the right to provide nothing. Italiano Couture? Really?