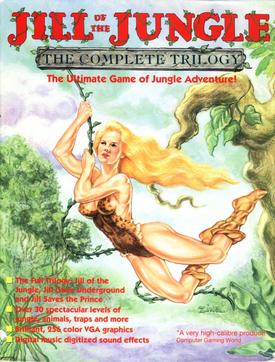 System: PC (DOS)
Overall: *** (3/5)
Game Summary: When you think “Laura Croft” or “The Night Elves” from WoW did you ever wonder where it all came from? Well for those who remember the contender: Jill! To keep pace with Keen and Duke, Jill was produced to offer another romp through a DOS Coded wonderland. Jill never engaged any bosses in combat. And for a game like this the puzzles were enough…

Graphics: DOS is DOS. Colors were standard. Jill had a nitch though- one of the few females you could adventure as in the early 90s. This was done by Epic Megagames (One Must Fall…UNREAL) so this was one of their little steps on the way to stardom. Not too flashy but didn’t ever give me a headache. So it worked for what it was- at the time.

Music: Jill had little to nothing. Sounds were stock. And little was “new” for its production. Appogee used quite a bit of this in their other games- nominal amount of sounds- but structure to give it a solid feeling.

Replay:There was none. No skill level, no different maps after the main ones. If you wanted to see how fast you could o through it you could!

In the End: Jill was fun for its time. Back then all three games were like 15 bucks. Roughly a month of saved chore money. Now a days it lurks in various torrents and floats around nearly forgotten.